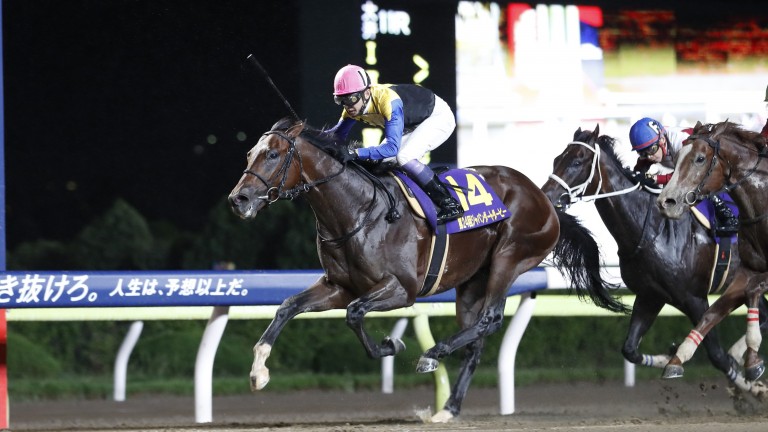 Notturno picked up his first Grade 1 success on Wednesday, much to the delight of rider Yutaka Take, who made his move outside on the straight and then held off his rivals in the Japan Dirt Derby at Ooi.

Son of Heart’s Cry and United States Cheikh’s Serenade, winner daughter of Unbridled’s Song, the three-year-old trained by Hidetaka Otonashi posted his third win in seven career starts by clearing three-quarters of a length from Peisha Es , with favorite Blitz Fang more than half a length in third.

The Japan Dirt Derby is the highest level of racing for three-year-old dirt horses in Japan, with Ooi Racecourse under the auspices of the Tokyo Metropolitan Racing Association of the NAR (National Association of Racing).

It was Take’s fourth Japan Dirt Derby win after Gold Allure in 2002, Big Wolf in 2003 and Kane Hekili in 2005. hE is the one and only rider to do the Japanese Derby double in the same year, having won the Tokyo Yushun on grass in 2002 on Tanino Gimlet, in 2005 on the great Deep Impact and this year on Do Deuce.

Do Deuce is, like, Notturno a son of Heart’s Cry.

Take said, “I’m so happy. I thought I had a good chance to come to Ooi today. I wanted to get a good result.

“I felt his condition was better than ever and entered the stalls with confidence. He was able to run smoothly after escaping from the outside stall and due to his good pace and the sodden ground from the rain, I let him move a little early around the house.

“I’ve been riding him since his debut, and he has a bit of a difficult mind, but the team staff are doing a good job of helping him grow.”

He added: “I am very happy to do the Derby double this year. I’m 53 and he’s only three, and I’d like to do some good with him.”

“For her, doing what she did is the icing on the cake and that’s why we do it”

Isaac Shelby continues the superlatives for Night Of Thunder