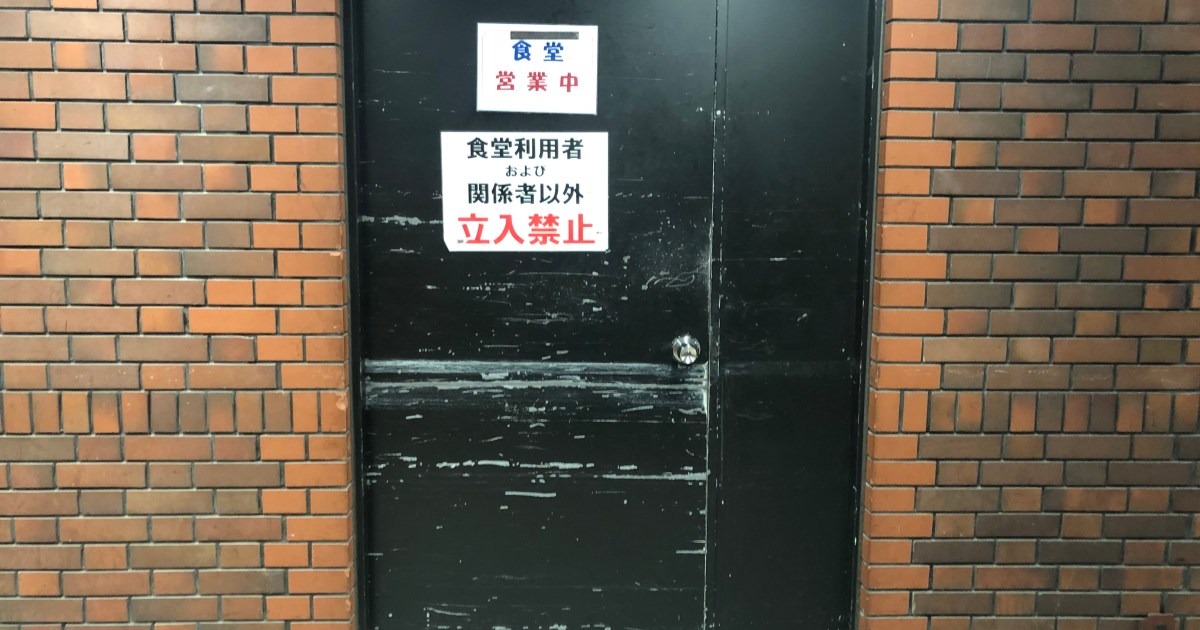 It’s going to take more than that creepy door to keep us from getting cheap food inside.

They say the coolest and most exclusive restaurants usually don’t even have signs out front because they’re only accessible to “insiders”. Interestingly, the same seems to be true for cafeterias. As noted earlier, there has been talk for some time of a cafeteria tucked away in a corner of Osaka’s sprawling Namba Station.

To say it’s hidden is actually an understatement and it will take a bit of adventure to get there the first time. From this cafeteria, called Namba Kyushokuba, is primarily for staff at Namba Station on the Nankai Line, it is not advertised anywhere or even located on Google Maps. But for those who find it, decent food and great prices await.

On the bright side, although quite huge, Namba Station isn’t as maze-like as Umeda-Osaka Station or Shinjuku Station and getting to the cafeteria is usually a short walk no matter where you come from. . That being said, because it’s so big there are a lot of entry points, so let’s look at some directions from the most common starting points.

Those who arrive by train will probably exit somewhere along the Namba Walk underground shopping street. Most subway exits converge at a hub in the center of Namba Walk, easily identified by this large group of signs on a very large case of stairs and escalators.

If you are looking at this sign now, turn right and take the first right. This should take you down a very long hallway that leads to Namba City Mall, Namba Parks, and most importantly, the Nankai Line.

Go straight for a while.

Eventually, the path will start to branch off, with one direction going to the Namba City Mall and the other to the Nanakai Line. Keep right and go up the stairs in front of the Nakai Line gates.

Once you go up the first set of stairs you want to stay to the left where you should see another set of stairs leading to the second floor where the cafeteria is.

In the very likely event that you missed the stairs pictured above, you will likely end up in this large area. However, the stairs and escalators here go to the third floor, not the second.

That’s not a problem though, as there’s also a small lonely escalator on the side that will take you to the second floor.

From there, head straight for the gates at the back.

For those coming from street level, you can walk straight into the Nankai Line entrances pictured above from the entrance next to Takashimaya Department Store, opposite Namba Marui Shopping Center (OIOI).

However, the easiest entry point from the outside is right at the top entrance of Namba Parks.

All you have to do is climb the first set of stairs pictured above, hang onto the left, and you’ll be exactly where you need to be.

Once at the front door, the next challenge will be to cross to the other side. Buying a ticket would work, but if you’re not planning on taking a train, it’s a waste of money or time trying to haggle for a refund. A much simpler way is to go to the window by the leftmost door in the image below and say to the employee: “I want to go to the Namba cafeteria, but, you know…” (“Namba Kyushokuba ikitai kedooohhhh…” in Japanese).

By pronouncing these magic words, they will then immediately give you a card which gives you access to all the shops on and around the quays. Don’t lose it, because you’ll have to flip it over to get out.

Once through the door, you’ll probably be watching this scene.

Start heading to the back left, near the 551 Horai dumplings and ice cream stand. There is a staircase leading to platforms 4 and 3, but do not climb them.

Instead, you want to go behind them and down that very nondescript hallway.

And here, next to the sprinkler system maintenance room, is the unwelcoming entrance to the staff cafeteria.

This door – which appears to have withstood a zombie invasion with “No Entry” being the most important word written on it – is a good point to remind anyone who wants to visit this this is a cafeteria, not a restaurant. By this I mean that their main job is simply to provide food for employees and anyone else who pays the price. It’s not about providing an enjoyable and memorable dining experience. This is important to keep in mind when dining here.

Once you go through the door, you’ll find yourself in another hallway. However, a cafeteria menu is posted right there to let you know you’re on the right track. The basic menu includes two sets for lunch and two sets for dinner which change daily.

I arrived in the morning that day and had a choice of chicken with spicy mayonnaise or lightly grilled mackerel. I went with the chicken, but while I didn’t like either of the two, they also have a side menu of standard Japanese foods like katsudon or curry and rice.

From there, I hiked a bit further down the back hallway normally reserved for staff.

Then, just around the corner, he appeared.

Like many restaurants in Japan, this place uses an ATM for ordering. There were also samples of the daily specials on a table. I thought the chicken looked a bit small, so I decided to order a bowl of miso soup too for 50 yen (US$0.43). When ordering the specials, you have to be careful to press the right button, station staff and civilians pay different prices, so if you don’t work there, be sure to press the 470 button yen ($4.05).

After that, take a yellow board to indicate that you are a civilian, unless you work there. In that case, grab a brown tray and order with the 450 yen bill ($3.87)… but why are you reading this then?

A few rather gruff elders work the counter, but “gruff” by Japanese standards is still quite polite and helpful by most other countries’ standards. For the most part, they’re just outspoken people expecting you to know how things work here, so don’t expect the caring service you might get at other Japanese restaurants.

For example, when I showed my tickets, the guy looked at me and said, “You know, the meal comes with miso soup so… You want two bowls? I was surprised, but I decided to have two anyway because I was quite hungry and it was just 50 yen. However, he seemed to interpret this as if I was just trying to be cool about screwing it up.

He pulled out a box of coins, ready to give me one as a refund and again asked “You Of course, you want two bowls? in a tone of voice that screamed, “Come on, man. Do not be stupid.

So I took the refund and a bowl of soup. After that, I was also allowed to choose another side dish for free. It was a pretty good selection of things like natto, tamagoyaki (Japanese style omelette), potato croquettes and bean salad. I went with the egg, but it was a tough choice.

There are no drinks for sale, just a machine that dispenses water. But each table has a set of fixings like soy sauce and shichimi spices that I sprinkled on my rice.

Like everything else about this place, the food was no frills. It’s Japanese cafeteria food through and through, but I can’t fault it. Everything was fresh and the spicy mayonnaise sauce was really good on the well cooked chicken strips.

The noodles were well cooked and tender served with a heap of shredded fresh cabbage.

The sample on the table also didn’t prepare me for how much rice I would get. All in all, it was a hearty meal, and for half the price I would pay for meals at other restaurants that don’t always fill me up.

Upon getting up to leave, I brought my tray to the designated area so the staff could clean the dishes. The guy yelled at me again, “Throw those chopsticks away, huh!”

“Oh, sorry,” I said, pulling them off my tray and tossing them into the box nearby.

He shouted back, “Thank you!”

Probably searching and finding the Namba Kyushokuba in the first place helped make the meal even more satisfying. So if you’re looking for a different dining experience in Osaka, and not expensive, the Nankai Line Staff Cafeteria at Namba Station is worth considering.