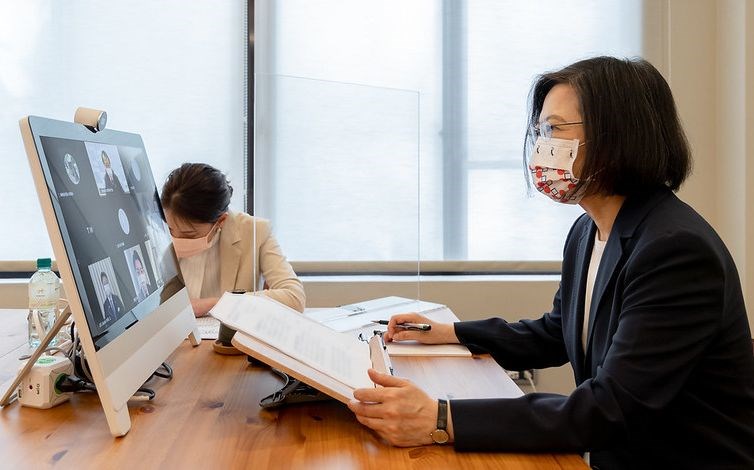 Taiwan will work with Japan to maintain regional peace: Tsai

Taipei, May 7 (CNA) President Tsai Ing-wen (蔡英文) said Friday that she believes Taiwan and Japan will continue their efforts to maintain peace in the Indo-Pacific region, during a virtual meeting with a visiting delegation from the Youth Division of the ruling Liberal Democratic Party (LDP) in Japan.

Tsai’s remarks echoed Japanese Prime Minister Fumio Kishida’s statement on Thursday that a peaceful and stable Taiwan Strait was essential not only for Japan’s security but also for the stability of international society.

In addition to Kishida’s support, Tsai mentioned that she received similar support during a separate videoconference held in March with former Japanese Prime Minister Shinzo Abe.

Tsai added that Taiwan will continue to cement its ties with Japan and increase trade not only at the government level but also within the private sector.

The meeting between Tsai and the Japanese delegation was held online Friday afternoon after Daisuke Nishino, a member of the 11-person Youth Division delegation, tested positive for COVID-19 in Taiwan early Thursday.

The delegation, led by LDP youth wing chief Masanobu Ogura, a member of the Japanese House of Representatives, arrived in Taipei on Tuesday for a five-day visit.

Tsai also expressed gratitude to Japan for a donation last year of more than 4.2 million doses of the AstraZeneca COVID-19 vaccine, which came at a time when Taiwan was struggling to secure adequate supplies.

Taiwan’s candidacy for the CPTPP

On trade-related issues, Tsai called on Japan to support Taiwan’s bid to join the Comprehensive and Progressive Agreement for Trans-Pacific Partnership (CPTPP).

Tsai said Taipei had demonstrated its determination to join the trading bloc by revising its laws to meet CPTPP standards and also lifting the import ban on Japanese food and agricultural products from areas affected by the nuclear disaster in Fukushima in 2011.

Although Taiwan applied in September 2021 to join the Tokyo-led trade pact, it has yet to win the unanimous approval of the current 11 members, which is a prerequisite for membership.

On Friday, 18 Chinese military aircraft flew over southwest and southeast Taiwan, marking another day of China’s provocative actions against Taiwan.