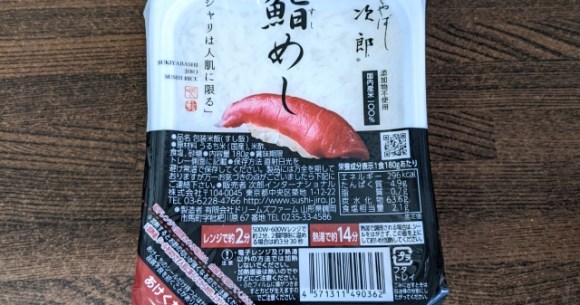 Sukiyabashi Jiro Sushi Rice: How good is the rice from the legendary Japanese sushi restaurant?

Recreate the expensive experience of a restaurant at home with authentic ingredients, at a fraction of the price you would usually pay for them.

Sukiyabashi Jiro in Tokyo’s posh Ginza district is often touted as one of the best sushi restaurants in the world. The restaurant gained worldwide fame with the 2011 documentary Jiro dreams of sushiand since then it has been visited by some of the world’s most famous people, including Barack Obama and David Beckham.

Notoriously difficult to get to and with courses costing hundreds of dollars per person, the restaurant remains out of reach for many people, including our foodie reporter Mr. Sato. So when he heard there was a way to taste the restaurant’s sushi rice at an affordable price, he immediately went out to find it.

▼ Sukiyabashi Jiro’s Sushi Rice can be purchased at the Ginza Branch of the Oji Salmon specialty store.

This store wants customers to enjoy their premium fish with the best quality rice, and so for them, nothing less than Sukiyabashi’s sushi rice will do.

▼ Rice is sold in ready-to-use packages that only need to be heated before consumption.

As sushi lovers know, sushi rice is just as important as the fish placed in it, and Sukiyabashi Jiro himself thinks it’s the most important element, saying: “The decisive factor in the taste of sushi is the sushi rice”.

This set the bar high for Mr. Sato’s expectations, especially when he saw the blurb on the packaging which read: “シャリは人肌に限る” (“Shari wa hitohada ni kagiru”), “Human skin heat is best for sushi rice”. This is a quote from Jiro Ono, the 96-year-old sushi master who owns the restaurantand that means the level of detail given to the rice, which is best served at the same heat as human skin.

The instructions on the packaging instruct the customer to follow Ono’s advice in keeping the seal on the packaging after heating to allow it to steam until it reaches human skin temperature.

Mr. Sato decided to honor Ono’s advice as best he could, and just to see if the rice was really worth the hype, he picked up a packet of his own brand Topvalu rice from a local shop. My Basket managed by Aeon to compare.

Both packs required two minutes of heating in the microwave at 500 watts, so Mr. Sato heated them together.

After heating, he left the vapor packs in their wrappers for a while before peeling off their plastic seals to test the temperature.

They seemed about right, so Mr. Sato sampled them, starting with the Topvalu rice, which shone pristine white. It was quite delicious – nothing out of the norm and a good quality standard offering.

While the Topvalu rice was plain and unseasoned, Sukiyabashi Jiro’s rice is sushi rice, so the vinegar flavor was present. The rice wasn’t as shiny as the cheaper version from Topvalu, but the quality was undeniable, as the grains were beautifully shaped and held together to create the right consistency. It didn’t fall off the spoon, but it also didn’t come together in a massive mass – the consistency was perfect.

The mouthfeel was sublime and the taste was slightly astringent, which is to be expected when eating sushi rice on its own. Of course, Sukiyabashi Jiro advises against eating the rice on its own, but rather enjoying it as hand-molded nigiri sushi or handmade makizushi, because that’s where the flavor really shines.

Unfortunately, Mr. Sato did not have enough money on him to buy rice and fishing when he was out that day, so maybe all he had to do was make a round trip to Oji Salmon to fulfill his own dream of fully recreating the Sukiyabashi Jiro experience at home. At 560 yen (US$4.16) a packet, it’s an affordable way to taste luxury, and once he finds another packet of Sukiyabashi Jiro seaweed, he’ll be ready for the perfect sushi night.

Images ©SoraNews24
● Want to be up to date with the latest articles from SoraNews24 as soon as they are published? Follow us on Facebook and Twitter!
[ Read in Japanese ]