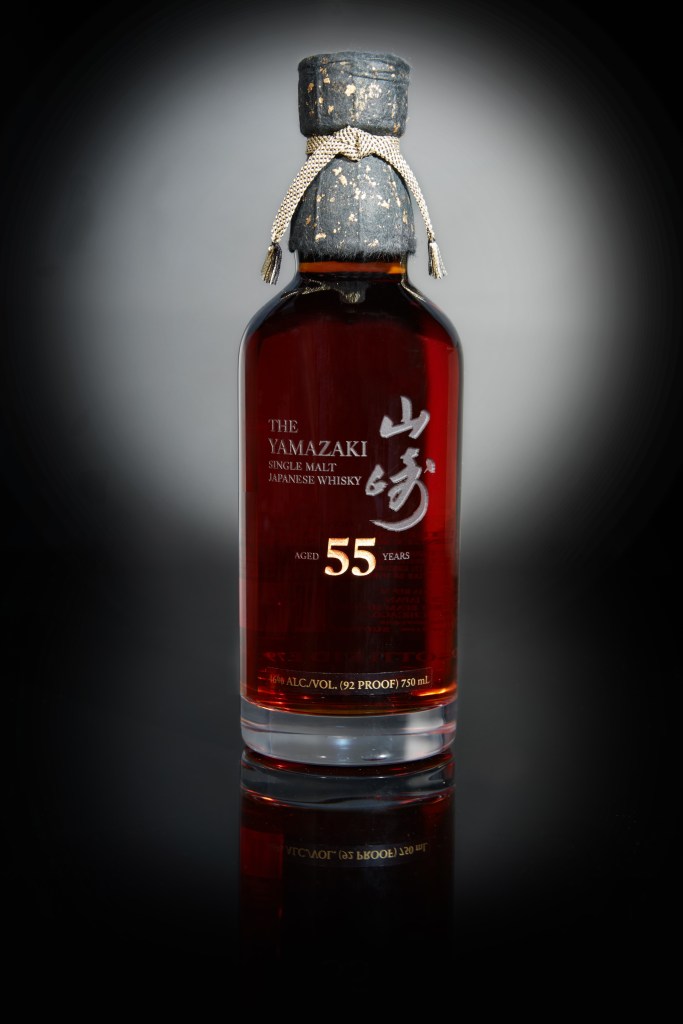 Released at just $31,000 a bottle, Japan’s oldest whiskey, 55-year-old Yamazaki, is expected to fetch half a million.

Estimated between 400,000 and 500,000 US dollars, Yamazaki 55 is the oldest and most valuable whiskey ever bottled in Japan. The first barrel was distilled in 1960 by Shinjiro Torii, the founder of Suntory, and aged in mizunara oak barrels. The second and third barrels were distilled in 1961 and 1964 by Suntory’s second master blender, Keizo Saji, then aged in American white oak.

The whiskey was established over half a century ago for three generations, until current Chief Blender Shinji Fukuyo, grandson of the founder, selected and blended these casks to create what is considered a true masterpiece in the world of whisky.

Whiskey auctions at Sotheby’s are open until June 17.

The Yamazaki 55 was originally launched in 2020 in Japan by vote for just 3.3 million Japanese yen (US$31,000) each. Due to its extremely limited international supply, the bottles have since reached six-figure prices at auction.

In 2020, Bonhams Hong Kong set a new record for the most expensive Japanese whiskey sold at auction after a bottle of Yamazaki 55 Year Old sold for HK$6.2 million (US$795,000).

According to the Suntory website, Yamazaki 55 has an aroma of sandalwood and ripe fruit. On the palate, the whiskey presents with a mixture of sweet and slightly bitter flavor, followed by a woody note from the Mizunara cask. The finish is slightly bitter, with a scent of fragrant wood and a hint of smoke.

Housed in a black Mizunara box, reflecting the barrels used to age this historic whiskey, the bottle is wrapped in layers of inky black handmade echizen washi paper and tied with a braided cord made up of 24 individual strands. The entire packaging is a reflection of traditional Japanese craftsmanship.

Jonny Fowle, Head of Whiskey for Sotheby’s, North America and EMEA, said: “A rise in whiskey prices has led to an increase in the value of new releases, with Japanese whiskeys being among the most sought after on the secondary market. Aged whiskeys are now quite limited in Japan, so much so that Suntory’s aged statement brands have either been discontinued or are only marketed on a very limited allocation. The Yamazaki 55 is the preeminent whiskey in this rare offering, and it is in a class of its own. An example of where price matches not just rarity, but quality, this whiskey embodies the key elements collectors look for in a collectible whiskey: a dark, heavily sherried whiskey released in limited numbers with a statement of very old age.

The origin of Japanese whiskey

Japan’s love of whiskey dates back to 1853, when an American naval officer named Matthew Commodore Perry arrived in Japan at the end of the Edo period. The Tokugawa shogunate imposed a strict rule of isolation at this time, which meant that no Japanese nationals could leave and no foreign visitors could enter.

Commodore Perry brought peace offerings – namely a white flag and a barrel of American whiskey – and the shogunate was won over by his approach to negotiation. As the laws regarding isolation later relaxed, imports of whiskey began.

The popularity of whiskey in Japan encouraged local brewers and distillers to recreate dark spirits and gave rise to the two most famous figures in Japanese whiskey – Shinjiro Torii, founder of Suntory; and Masataka Taketsuru, founder of Nikka Whiskey Distilling and son of a sake brewer.

Shinjiro Torii founded a small wine shop called Torii Shoten (former name of Suntory) in 1899 with the goal of creating Western-style liquors for Japanese palates. Prior to launching Nikka Whisky, Taketsuru worked in Torii’s business for over 10 years.

In 1923, they landed in the village of Yamazaki on the outskirts of Kyoto after a search for a perfect location for their distillery. In 1929, the Yamazaki Distillery released Japan’s first authentic whiskey, Suntory Whiskey Shirofuda.

Masataka Taketsuru, known as the “Father of Japanese Whisky”, brought his Scottish knowledge of distillation to the development of Japanese whiskey after spending three years in Scotland working at the Longmorn, Bo’ness and Hazelburn distilleries. He then established Nikka Whisky, one of Japan’s most popular whiskey companies in 1934.

No one could have predicted the quality of the whiskeys from Japan’s very first single malt distillery, or the value their bottles would hold at auction today.