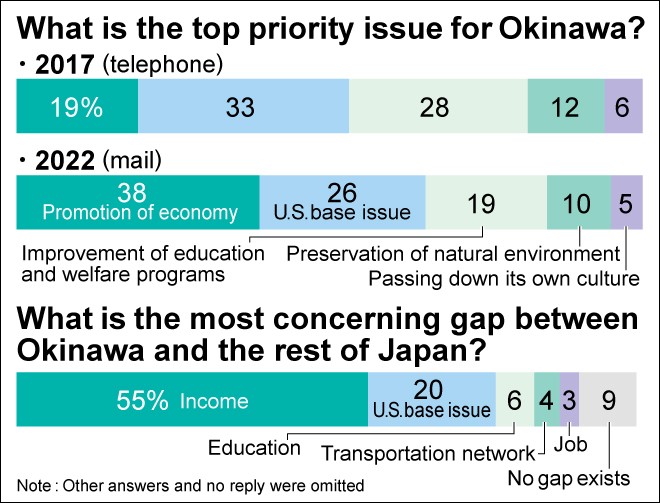 Poll: 89% of Okinawa residents believe there are “gaps” with the rest of Japan

According to a survey, 89% of Okinawa residents believe their prefecture has lagged behind the rest of the country in some areas, including income and education levels.

According to the survey, only 9% of the inhabitants of the southern island prefecture believe that there are no differences.

The investigation was conducted by The Asahi Shimbun, The Okinawa Times and Ryukyu Asahi Broadcasting Corp. in March and April, ahead of the 50th anniversary of Okinawa’s return to Japanese sovereignty from US military rule in May.

In telephone surveys conducted in 2002 and 2012, less than 80 percent of respondents believed that such discrepancies existed between Okinawa and other Japanese prefectures.

In the last survey, respondents were asked to choose the area with the greatest disparity among: income; job; transportation network; education; and feelings toward the US military base issue.

The largest group, at 55%, chose income, followed by 20% who chose sentiments towards the core issue in the United States.

Asked what they thought was the most pressing issue for the prefecture, 38% of respondents in the latest poll said the economy, compared to 26% who chose to address the US base issue.

Forty-four percent of respondents in the latest survey support the central government’s approach of providing grants to local governments willing to host US military facilities, while 51 percent oppose the program.

In 1971, prior to Okinawa’s return to Japan, the US military-controlled Ryukyu Islands government compiled a five-pillar proposal for Okinawa’s future without US bases to the Japanese government.

Asked to choose up to two pillars that have not yet been sufficiently achieved, the most common response was Okinawan people-led economic development, at 41 percent, according to the latest survey.

The survey was conducted by sending questionnaires to 2,000 randomly selected eligible voters in the prefecture. Valid responses were collected from 1,218, or 61%.