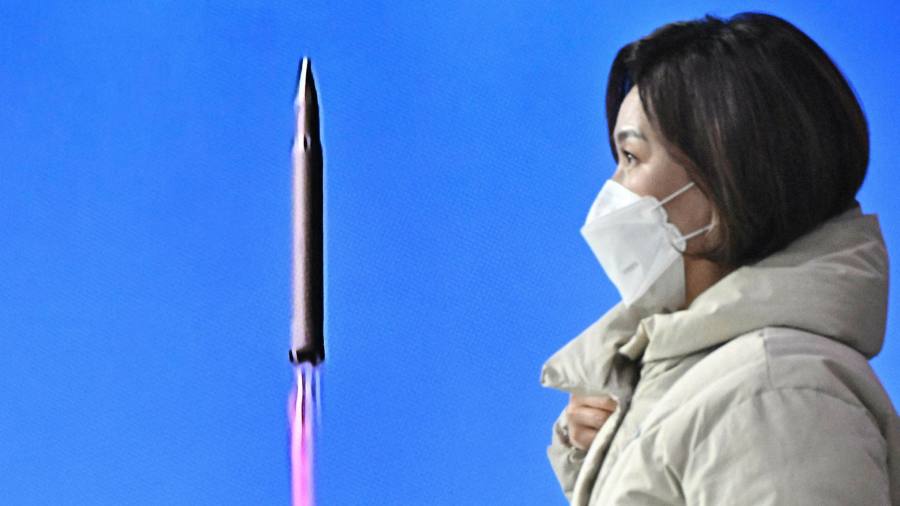 North Korea tested what appears to be its longest-range intercontinental ballistic missile on Thursday, the latest sign that Pyongyang is continuing to make significant progress in developing its weapons program.

South Korea said the ICBM reached an altitude of more than 6,000 km – the highest a North Korean missile had flown – and traveled for about 71 minutes to a distance of 1,080 km from its launch site near Pyongyang.

The missile landed in the Sea of ​​Japan in Japan’s exclusive economic zone 170 km west of northern Aomori prefecture, according to the Japanese Coast Guard. The sea is known in Korea as the East Sea.

Two people familiar with the details of the test said the ICBM traveled to a much higher altitude than previous missiles, suggesting North Korea had increased the theoretical range of its ballistic missile arsenal.

The US State Department condemned the test, which it said followed “at least” two other ICBM tests this year. The United States previously said North Korea tested elements of an ICBM system in February and March.

But Thursday’s statement suggested that US intelligence had upgraded its assessments of those tests to full ICBM launches.

“This is the longest-range potential ICBM North Korea has ever tested,” said Ankit Panda, a nuclear weapons expert at the Carnegie Endowment for International Peace. “It could be due to a reduction in payload weight to test new fuel storage technologies, or because it’s a new large missile.”

Hours after the launch, the South Korean military fired several missile systems as part of a “surface-to-sea-to-air missile” exercise.

South Korea’s Joint Chiefs of Staff said the drills demonstrated “the ability and readiness to conduct a precision strike against a missile’s launch point, command and support facilities at any moment if North Korea fires a missile”.

Fumio Kishida, the Japanese prime minister, called North Korea’s test an “unacceptable act of violence”. He said the repeated launches of ballistic missiles by Pyongyang “threaten the peace and security of our country, the region and the international community”.

The ICBM tests in recent months were the first since 2017, when North Korea first tested a long-range ballistic missile with the theoretical range to strike the continental United States. It came amid a period of confrontation with the United States in which then-President Donald Trump threatened “fire and fury” on Pyongyang.

Christopher Green, senior consultant for the International Crisis Group, said deteriorating US relations with Russia and China had likely emboldened Pyongyang and the region was heading for “rough waters”.

“Although UN resolutions ban all manner of ballistic missile tests, the truth is that the only ones that make the United States and its allies sit up and take notice are long-range,” he said. Green.

Thursday’s missile test came as Admiral John Aquilino, the top US commander in the Indo-Pacific region, visited Australia as part of the US effort to work even more closely with its allies to deal with threats from China and North Korea.

“The United States condemns these actions and calls on the DPRK [Democratic People’s Republic of Korea] to refrain from further acts of destabilization,” the US Indo-Pacific Command said in a statement.

Analysts said Thursday’s test could mark the start of a new period of confrontation after years of moribund diplomacy following the collapse in 2019 of a Hanoi summit between Trump and North Korean leader Kim Jong Un. .

He added that while there was broad international consensus behind sanctions against Pyongyang after its 2017 ICBM test, the collapse of US-Russian relations over Ukraine and heightened competition between Beijing and Washington now meant that North Korea faced “little risk of sanctions for this type of test”.

Separately on Thursday, the United States imposed sanctions on six entities and individuals in North Korea, Russia and China for helping Pyongyang continue to develop its missile program.

FacebookTwitterLinkedinMix
2022-03-24
Previous Post: Japan is trying to lure a world-class art fair to Tokyo with tax incentives and a large open art space. Will the bet pay off?
Next Post: Underlying inflation in the Japanese capital hit its highest level in 2 years in March