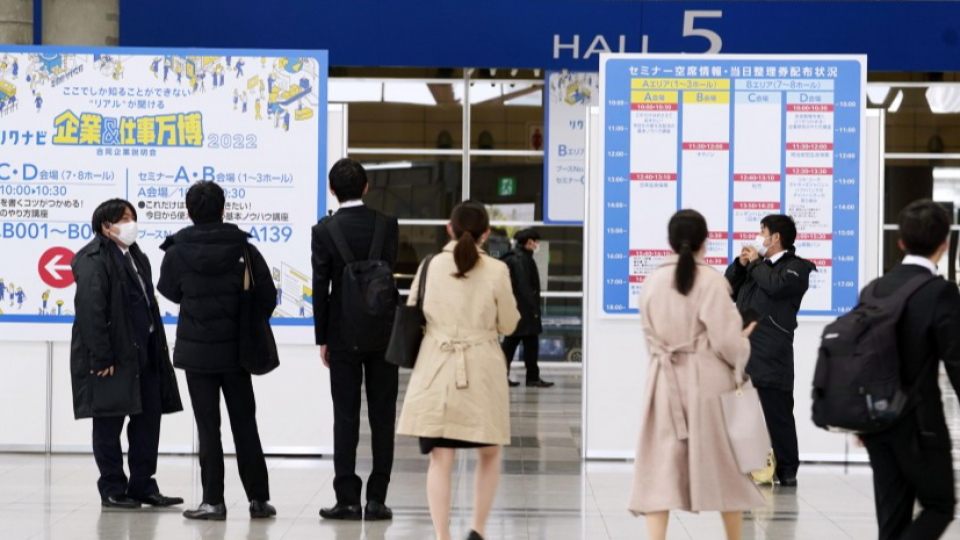 Forty-two percent of large Japanese companies plan to increase hiring of new graduates in fiscal 2023, a survey by Kyodo News revealed on Sunday, reflecting more companies planning a recovery from the coronavirus pandemic.

The ratio of these optimistic companies jumped 25 points from a survey carried out a year ago. It topped that of companies planning to limit the hiring of new graduates, 9%, for the first time in three years.

Of the 117 companies surveyed, 49 said they would hire more in the year from next April compared to the previous year’s levels. The investigation also revealed that the fallout on their recruitment plan from the Russian war against Ukraine is considered relatively limited.

Students graduating from the university in 2022 attend a job fair at Makuhari Messe in Chiba Prefecture on March 1, 2021. (Kyodo)

Of the remaining respondents, 30% said they would maintain the same levels as in FY2022, while 14% were undecided.

The survey was conducted between mid-March and early April.

Companies that had been hit hard by the pandemic, such as airlines and the tourism sector, stood out in their determination to increase recruitment as they explored new avenues for growth. ANA Holdings Inc. and Imperial Hotel Ltd. are part of.

In contrast, some companies in the finance and energy sectors said they would limit new graduate hires. Instead, they plan to expand mid-career recruitment and improve business efficiency through digitalization.

Most Japanese companies recruit new graduates at the start of each fiscal year, beginning the hiring process about a year in advance.

In the survey, the most common reason cited for increasing recruitment was “business expansion” at 33%, followed by 18% noting the need to balance the age distribution of employees.

Regarding the invasion of Ukraine by Russia, 57% consider its impact on their recruitment plan as “not significant”.

While 1% said the war in Europe could lead to a drop in recruitment, 33% said they could not assess its impact now.

The Ukraine crisis has caused commodity and crude oil prices to rise, raising fears it could squeeze corporate profits amid reluctance to pass additional costs on to consumers.

When it comes to recruiting amid the pandemic, 19% said they would complete the entire process online, up 3 points from the previous survey.