On February 8, 2022, the Japan Fair Trade Commission (“JFTC) has published its “survey report on the acquisition of information systems by public administrations” (“Report“)1 .

The report was prepared based on a factual investigation conducted by the JFTC and with reference to the discussions held at the “Information Systems Acquisition Opinion Exchange Meeting”, also convened by the JFTC. . As part of a government-wide initiative to “promote the digitalization of public administration”, the JFTC launched the factual survey to understand the current status of information system procurement by national and local governments in Japan , with particular emphasis on avoiding ‘vendor lock2 .’ As such, although the report is derived from the factual survey of information systems in the public sector, it also presents certain ideas within the framework of Japanese anti-monopoly law (“WADA», Japanese competition law) which may also be useful for transactions involving information systems in the private sector. This newsletter3 summarizes the main points of the Report and examines the points to remember, from the point of view of compliance with competition law, in transactions relating to information systems markets, whether public or private.

II. Summary of the report – five categories of behavior

The report analyzed five types of conduct in the context of the AMA and noted a number of points for consideration by system providers to ensure compliance with the AMA. Table 1 below provides a summary of the report’s findings and recommendations. As noted above, although the JFTC’s factual investigation focused on avoiding “vendor lock-in”, “vendor lock-in” itself is not immediately considered problematic in the WADA framework; instead, the report states that an AMA violation could occur when a specific instance of conduct (such as the following) occurs that causes an anti-competitive effect in the marketplace. 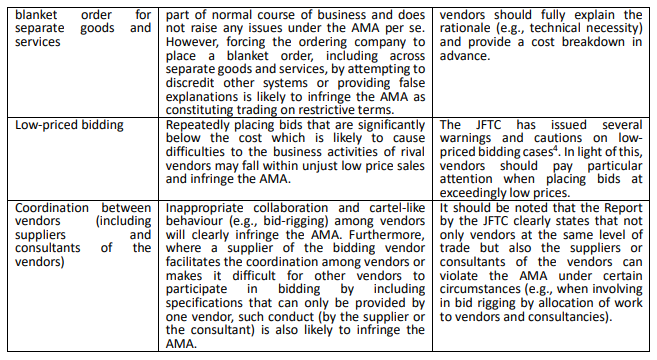 The JFTC’s factual survey asked Japanese public authorities whether they had directly encountered or observed any of the five categories of conduct listed in the report. The results showed that the percentage of positive responses was quite low (between 0.5% and 3.9%), suggesting that such behavior is not widely practiced in the Japanese public sector. Nonetheless, in light of the concepts and theories presented in the report and the JFTC’s recent enforcement actions and trends, we believe there are a few key takeaways (in addition to the points for vendors to note for compliance in the right column of Table 1 above).

In this regard, the report, referring to the well-known Paramount Bed5 case in Japan, clarifies that the allegation of exclusive private monopolization (exclusionary conduct) can be established if all of the following elements are present6:

(a) Provide inaccurate information to enable bidding based on specifications which can only be handled by itself;

(b) Increase competitors’ costs and make it difficult for them to participate in the bidding process by incorporating its own specifications; and

(c) Causing the Principal to make an offer contrary to its procurement policy.

In the case of purchasing systems, if item (a) above is satisfied, then item (c) is also likely to be satisfied. This type of behavior, particularly when all of (a) through (c) above are met, would be more likely to be considered a WADA violation among the five categories of behavior identified in the report, and therefore deserves attention.

(ii) Coordination between suppliers and consultant for suppliers

Bid coordination where competing vendors jointly decide the outcome of the bidding process is a typical SA violation (i.e. cartel activity). However, as the report points out, the range of entities that may be involved in coordinating a bid is not limited to just suppliers. For example, if a consultant, who provides support services to a supplier, behaves in a way that makes it easier for suppliers to coordinate a bid or makes it difficult for other suppliers to bid effectively by including specifications that can only be met by a particular supplier, that consultant may also be in violation of the AMA, as a party to a cartel or private monopolization.

In recent years, among the cases in which the JFTC has taken formal enforcement action, there have been several cases of private monopolization7 and cartel89 involving companies that provide seller support services. In particular, unlike previous approaches to enforcement, it no longer seems unusual for the JFTC to expand the scope of companies it has found to have violated the AMA; for example, by including companies at a different commercial level (i.e. not merely identifying suppliers at the same level as the offending suppliers) in a cease and desist order.

In view of the above, not only system vendors but also consulting firms, which provide support services to system vendors, should understand and take note of this point as stated in the report.

The report was based on a factual investigation published as part of the JFTC’s advocacy activities, not as part of a specific case investigation. Furthermore, it should be noted that the categories of conduct that have been identified and discussed in the report, as well as the approaches and theories mentioned, are not particularly new and are relatively orthodox.

However, as mentioned at the outset, the AMA approaches and theories presented in the report should not be seen as limited to procurement of systems in the public sector alone, but recognized as equally applicable to a wide range of procurement transactions. purchase of information systems in the public sector. private sector. In addition, for many of the categories of conduct, against which the approaches under the AMA have been presented in the report, the JFTC has some application experience that can be used as a benchmark or precedent for specific investigations in the future. It is therefore important for suppliers and other companies involved in the bidding process to understand the report’s approaches and ideas, as well as the categories of conduct examined, and to reconsider their compliance with the AMA. Japanese.