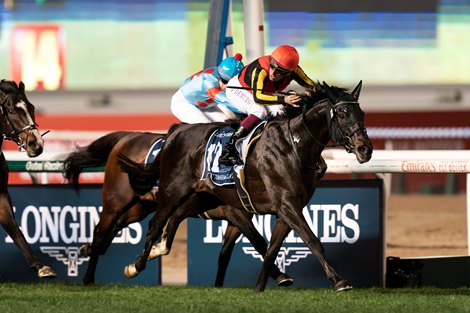 It was Japan’s fifth victory out of eight Thoroughbred races on the card, counting a tie victory in the DP World sponsored Dubai Turf (G1), and followed breakthrough performances at the World Championships in Breeders’ Cup 2021 and the Saudi Cup undercard in February. .

🇯🇵 A dream night for Japan continues in Meydan

But the crest of the wave may not have come yet, as talk immediately turned to the Qatar Prix de l’Arc de Triomphe (G1) in October, the race that Japan has been chasing in vain for decades. .

The Sheema Classic result was set up perfectly for 4-year-old Shahryar deep impact foal. The first race was made by Authority , winner of the Neom Turf Cup Presented by Jahez (G3T) in Saudi Arabia. But the pace was moderate at best and that jeopardized the chances of Yibir, a confirmed latecomer who won the Longines Breeders’ Cup Turf (G1T) at Del Mar on his last departure.

As Shahryar and jockey Cristian Demuro passed Authority on their way to the finish, William Buick blasted Yibir towards the middle of the track, but ran out of time and settled for second place. Authority retained for the third party. Pyledriver was a close fourth with yet another Japanese rider, Überlebenfifth.

“He had a very good race behind the leader,” said Demuro. “When he came out he had a really good turn around.”

“We won the (Japanese) Derby (G1) so we were very confident coming here,” he said. “It’s normal that he’s a little on his guard.”

When immediately asked if his colt could finally turn the corner for Japan in Paris in the fall, Fujiwara said: “It would be a dream for me to take this horse to the Prix de l’Arc de Triomphe. This is the race we want to win and it would mean so much to be able to take him there, it is our ambition and our goal.

“It’s amazing to win a race like this,” Demuro said of the Sheema Classic. Incredible also to win on a Japanese horse. They show that they are the best in the world.”

Pyledriver driver Frankie Dettori lamented: “It was a great course and he didn’t manage to separate at the crucial moments. But I’m very happy with him.”

Glory Vasewinner of the Longines Hong Kong Vase (G1) in his last race, finished eighth and jockey Christophe Soumillon admitted: “The pace was too slow for him.

Shahryar, with the familiar Japanese connections of breeder Northern Farm and owner Sunday Racing Co. Ltd., rose to prominence in the Japanese Derby, or Tokyo Yushun, last May. Sent a moderate longshot in this event, he won by a nose on Eforia with Stella Veloce the third.