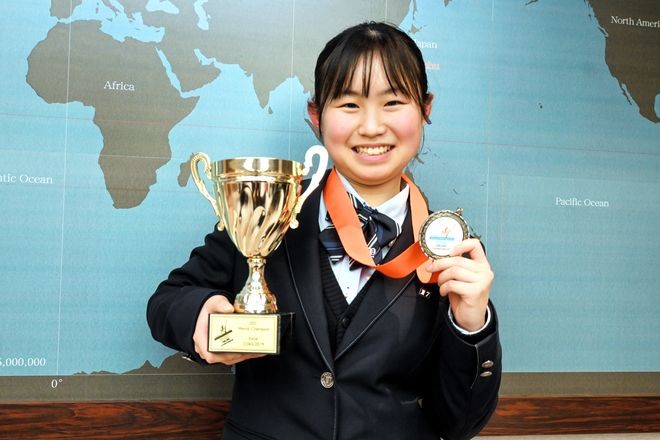 KITA-KYUSHU – A photo of Ami Nakazono shows her using a computer when she was 3 years old.

Inspired by her mother, a computer teacher, Nakazono, now 17, became engrossed in computers while playing with typing training software.

She won a nationwide competition as a sixth grader in primary school, where contestants show how fast and accurately they can type.

The event was held over the internet, with representatives from 33 countries and regions demonstrating their prowess on the American company’s Office applications.

Among the global entrants who are mostly college and technical school students, Nakazono became the first Japanese high school girl to win the contest in its 19-year history, making her achievement truly remarkable.

Nakazono became interested in Excel during a class at Yahata High School in Fukuoka Prefecture in Kita-Kyushu.

Because “managing it seemed like a difficult and challenging task,” she honed her knowledge and skills to skillfully navigate Excel.

She took an exam in March last year and was selected from 20 applicants to enter the international competition on behalf of Japan.

In an interview to select national representatives, she repeatedly promised to “become world champion”.

While she enjoys watching videos on YouTube and listening to pop music like many high school students, Nakazono‘Her strong and competitive spirit has helped her stay true to her word.

“It would be so unfortunate if I lost to myself,” Nakazono said.

Currently, Nakazono dreams of finding a job that takes advantage of her aptitude for English. She has never traveled outside of Japan despite her status as a world champion, and one goal for her is to get into a university and then go study abroad.

FacebookTwitterLinkedinMix
2022-04-14
Previous Post: 30,000 international students have returned to Japan since the easing of COVID-19 measures
Next Post: ‘Thai Messi’ Chanathip makes a name for himself in Japan