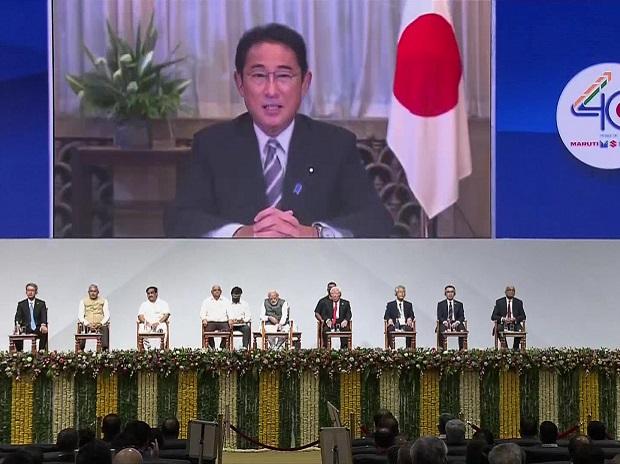 While virtually attending an event in Gandhinagar, Gujarat, to mark 40 years of Suzuki Motor Corporation in India, Japanese Prime Minister Fumio Kishida, Minister, “We owe the success of Maruti Suzuki to the support of the people and Indian government. Recently, India’s economic growth has further accelerated thanks to various support measures for the manufacturing sector, guided by the strong leadership of PM Modi.”

Meanwhile, Prime Minister Narendra Modi said the success of Maruti-Suzuki signifies the strong partnership between India and Japan. PM Modi laid the foundation stone of Maruti Suzuki vehicle manufacturing plant for Haryana and Suzuki EV battery plant for Hansalpur in Gujarat on Sunday during the event in Gandhinagar, Gujarat.

Recalling former Japanese Prime Minister Shinzo Abe’s efforts to take India-Japan relations to another level, the Prime Minister said, “Over the past eight years, this relationship between our two countries has reached new heights.” .

“Today, from the Gujarat-Maharashtra high-speed train to the Rudraksha center in Benares, many development projects are examples of Indo-Japanese friendship. And when it comes to this friendship, every Indian remembers definitely from our friend, the late former Prime Minister Shinzo Abe.”

He expressed hope that, in the continuity of Abe’s legacy, Japanese Prime Minister Fumio Kishida will advance relations between the two nations. “When Abe Shan came to Gujarat, the people of Gujarat fondly remember his time here. Today, Prime Minister Kishida continues his efforts to bring our countries closer together,” said the Prime Minister Modi.

Prime Minister Modi underlined that the relations that exist between Gujarat and Japan have always been superior to diplomatic relations alone. “I remember the Vibrant Gujarat Summit being launched in 2009, since then Japan has been associated with it as a partner country,” the prime minister said.

“The success of Maruti-Suzuki also signifies the strong partnership between India and Japan. Over the past eight years, this relationship between our two countries has reached new heights,” he added.

The Prime Minister also spoke at length about the benefits of electric vehicles. “One of the great characteristics of electric vehicles is that they are silent. Whether it is a 2 or a 4 wheeler, they make no noise. This silence is not only a question of engineering, but it is also the start of a silent revolution in the country.”

India announced at COP-26 that it will reach 50 PCs of its installed electricity capacity from non-fossil sources by 2030 and we have set a ‘Net Zero’ target for 2070, PM Modi added .

(Only the title and image of this report may have been edited by Business Standard staff; the rest of the content is auto-generated from a syndicated feed.)