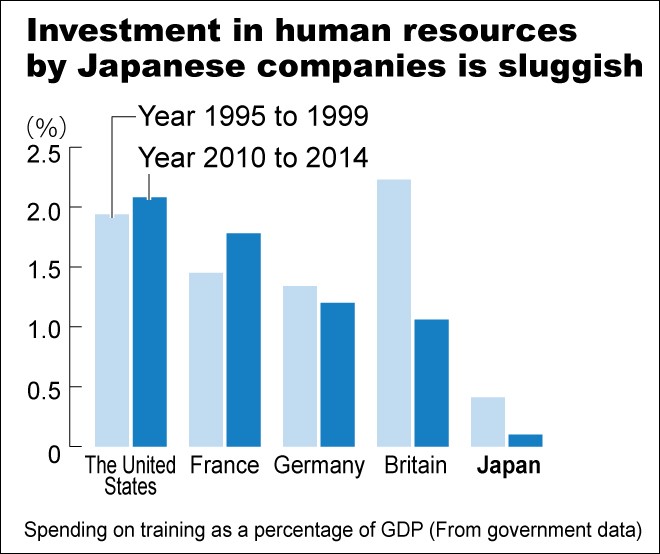 The central government plans to increase investment in education and vocational training to attract workers from developed industries to sectors with strong prospects for future growth.

It aims to achieve this through actions such as expanding career counseling for workers and encouraging them to find secondary jobs.

The move comes amid concerns that Japan is lagging behind other countries in investing in human resource development and that workers are not moving fast enough in these areas.

The government seeks to boost labor productivity and educate workers about opportunities in these developing industries, such as the digital industry, whether or not they currently work for companies in these sectors.

This will be part of a soon to be drafted action plan to achieve what Prime Minister Fumio Kishida calls the “new capitalism”.

The government has already announced a set of investment policies worth 400 billion yen ($3.2 billion) over three years to fiscal 2024 to help move workers to these growth sectors. by supporting skills development for non-regular and non-regular workers.

In particular, he plans to set up a system in which workers can consult an expert on changing careers and transferring jobs within their current companies.

The government will consider incentivizing workers to do so by offering a grant they would become eligible for once they have consulted an expert outside their company.

A government-linked person said the policy will ‘help workers think about what they want to do and take their careers to the next level over the next 10-20 years’.

The new policy is driven by a sense of crisis that Japanese labor is not moving fast enough to these growing industries.

According to a government document, the cost of training provided by Japanese companies outside of normal work is only about 0.1% of gross domestic product (GDP), which is far behind other developed countries.

The action plan will include a promise that the government will at least double investment in human resources as soon as possible, to do things like support training where workers can acquire the specialized skills needed in growing industries. And it aims to further increase these investments.

As part of its growth strategy, former Prime Minister Shinzo Abe’s administration has also drawn up a plan to move workers into growing industries.

This was one of the main policies of the administration.

But it was revealed that employment agencies had used the grant to advise companies to cut redundant staff, and the government responded by tightening the conditions for obtaining the grant.

Because of all this, the system was not widely used.

The Kishida administration should revise the directives put in place by the Ministry of Labor to promote side jobs and free time occupations.

The review will suggest companies disclose information, such as whether they allow employees to have second jobs or time off occupations and under what conditions.

It will include a statement that opening a business in stages through side work is more likely to lead to success, and allowing employees to get second jobs or time off occupations is a benefit to businesses. as this will help alleviate staffing shortages.

According to a government survey, the larger the size of a company, the more cautious it is about allowing its employees to take on second jobs.

But the government is revising the rules in part to encourage big companies to allow employees to get side jobs.