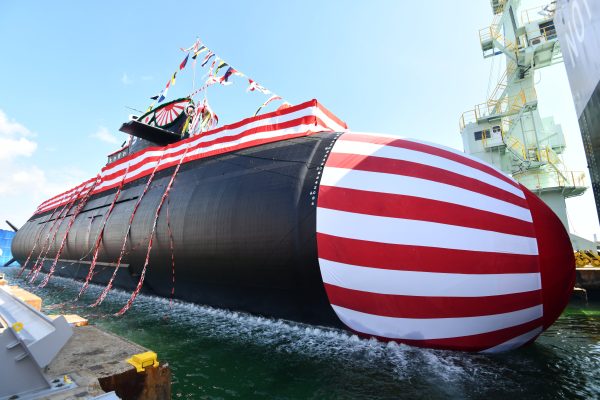 The diesel-electric attack submarine Taigei, seen here during her launching ceremony in October 2020. The ship was commissioned on March 9, 2022.

The Japan Maritime Self-Defense Force (JMSDF) commissioned the first of the new Taigei-class diesel-electric (SSK) attack submarines in a ceremony held on March 9 in the prefecture of Hyogo, in west-central Japan.

Named JS Taigei (with pennant number SS 513), the new boat was inducted into Escort Division 4 of Escort Flotilla 2, which is based at Yokosuka Naval Base in Kanagawa Prefecture, shortly after being handed over by shipbuilder Mitsubishi Heavy Industries (MHI) at its Kobe City factory.

According to the JMSDF, the new submarine has a crew of around 70, an overall length of 84m, a beam of 9.1m, a draft of 10.4m and a standard displacement of around 3,000 tons, which means it is slightly larger. than the previous well-known Soryu-class SSKs, which are 84m long, 9.1m wide, 10.3m deep and have a standard displacement of 2,950 tonnes.

Taigei means “big whale” in Japanese and was the name of an Imperial Japanese Navy submariner.

The new submarine, which cost around 80 billion yen ($690 million) to build, is powered by a diesel-electric engine generating 6,000 hp.

The new Taigei class will use a “compact” and “highly efficient” power supply and storage system that will extend the endurance of the submarine underwater without the need to increase the size of the boats, according to the Japanese Ministry of Defense (MoD).

The class will use a new combat management system (CMS) combining advanced integrated sensors, command and control and weapons engagement systems, the Department of Defense said.

It will also adopt an improved snorkel system to reduce signatures and a next-generation sonar system based on fiber optic array technology to improve detection capability.

The Taigei class will use the same torpedo countermeasures system that has been incorporated into the last four Soryu class boats. It is planned to use Japan’s newest torpedo, which is called the Type 18 and is expected to succeed the Type 89. Originally called “G-RX6”, the new torpedo will feature improvements in a number of areas, including propulsion, target detection and processing.

The class is also capable of deploying the UGM-84L Harpoon Block II anti-ship missile against surface targets. That missile range is 248 km – enough for Japan to build an “enemy base attack capability”, which is still hotly debated in Tokyo.

The second Taigei-class submarine, named Hakugei (with pennant number SS 514), was launched by Kawasaki Heavy Industries (KHI) in October 2021 and is expected to enter service in March 2023. Hakugei means “white whale” in Japanese.

The MoD has allocated funds for the construction of four more class submarines – SS 515, SS 516, SS 517 and SS 518 – with MHI building the first, third and fifth, and Kawasaki Heavy Industries (KHI) the second. , fourth and sixth boats in the class.

Most recently, on December 24, 2021, the Japanese Ministry of Defense was allocated 73.6 billion yen for the 2022 fiscal year beginning in April to build the sixth boat in the class.

So far, Japan is the only known country to have installed lithium-ion batteries in SSKs, with South Korea expected to be the next country to do so.