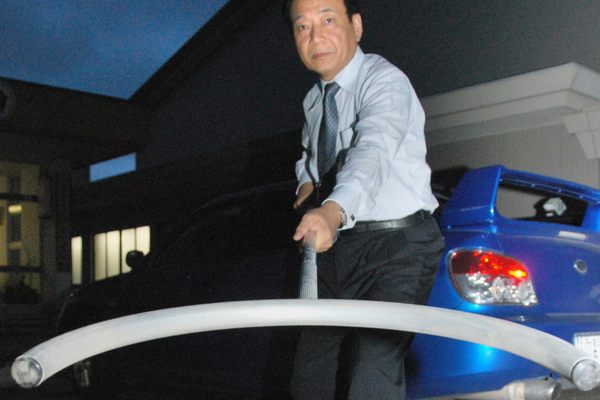 In Japan, ‘intruder’ drills at school are full-contact and unpredictable

“A man with a knife will come to school today. It’s not exactly the welcome you expect when you show up at work. But that’s what the vice principal said when I arrived at the middle school where I was teaching in rural Gunma Prefecture, Japan. It was time for the annual trespassing drill, a common practice in schools across the country. Japan is renowned for its low crime rate, but the country is particularly vigilant about protecting schools and students. And one of the ways they do this is through regularly scheduled and tightly controlled gunfights.

Violent crime is rare in Japan compared to other developed countries, but it has seen a few tragic incidents targeting schools or students in the past two decades. Unlike the United States, where gun violence is a concern on all school campuses, violence directed at schools in Japan overwhelmingly involves knives, in part because of Japan’s strict gun laws. The most infamous of these attacks took place in Ikeda, a suburb of Osaka in 2001, when eight students lost their lives after a man with a history of mental illness was attacked.

“What shouldn’t have happened actually happened in Ikeda,” said a mayor near Tokyo. The New York Times so.

China also experienced a number of such incidents over a short period of time in 2010, a period during which it was also performed in Yokohama. In a dramatic response to concerns about these threats, school boards across Japan have implemented a series of reforms in elementary schools. Campus doors are locked during class hours and security guards are often present when students arrive and depart. In 2021, a small police station called a kōban was opened in the field from Sakura Elementary School in Osaka, considered the first of its kind. The local school board said it wanted the school to be ‘the safest school in the country’. Citizen patrols, including parents and other community volunteers, have also become common over the years. All told, as of 2018, 97.7% of schools in Japan had some form of security measures in place.

And among the security measures are perhaps the most unusual: full-contact drills in which school staff confront a simulated intruder, using an impressive array of weapons. Although the selection varies from school to school, nearly 97% of staff rooms in schools are equipped with sasumata: a two-pronged non-lethal variant of a medieval mantrap used to trap and restrain intruders. Bo (wooden bars), nets, whistles, zip ties, chemical irritants, and even stun guns and tear gas might also be available, to use as tools for the “Reduction of violent behavior and persuasion to leaveaccording to the Office of Disaster Reduction Research, part of MEXT.

For these “intrusion exercises”, on an appointed day each year, a trainer, often a local policeman, shows up at school dressed in stereotypical, baggy “suspicious person” clothing – mostly a hoodie with sunglasses, with combat padding underneath – and carrying a cardboard knife. After spooking the students a bit in their classrooms, the intruder is assaulted by teachers working in teams, usually divided into “grab teams” and “rescue teams”.

Seizure teams, using sasumata and improvised tools such as chairs, are tasked with immobilizing an intruder’s arms and legs. That was my role, along with the school’s physical education teacher and several other physically strong instructors. Ordered to tackle the intruder/trainer against a wall with the sasumata, I quickly found myself deposited on my buttocks. Not really wanting to hurt the trainer, I moved too gently, allowing him to snatch the sasumata from my hands.

Rescue teams are tasked with pursuing the intruder’s weapon with clubbing blows to the hands and arms. Others help get students to safety, relay information and call the police. Everything happens at full speed and in full contact. The exercise often ends with a school-wide address by the principal and the policeman – intruder – and, of course, mascots, lots of mascots—reinforce the importance of emergency preparedness. Teachers also benefit from a debriefing.

Some schools modify their approach to these exercises as needed. A former elementary school teacher in Tokyo who now teaches in Miyagi prefecture says her former school took a more low-key approach to avoid scaring students. There, she says – on condition of anonymity due to civil service guidelines in Japan – the trainer stayed away from the classrooms and conducted the exercise with the teachers, quietly, away from the students, “so that the children do not feel great fear and become traumatized. .” The children, however, later witnessed a protest with police and staff in the school gymnasium.

“Whether it’s useful or not depends on the content of the training,” she adds. For example, a pre-determined “success story” that is simply played out from start to finish is less than ideal. However, free-form formation – the kind where “I don’t know what kind of actions the suspicious person is going to do” – is considered more useful. Indeed, at Ikeda Primary School, the site of the 2001 incident, the school administration and teachers are deliberately kept in the dark on the planned route of the intruder during the exercise.

But the exercises were effective. Recent years have seen a number of cases in Japan in which armed intruders been with success mastered by teachers using sasumata and other tools. Conversely, recently daycare at Tome City—which relied on tabletop drills rather than live drills and did not equip staff with sasumata—a knife-wielding intruder had to be confronted by bare-handed staff at considerable personal risk. He was eventually subdued and no one was injured.

FacebookTwitterLinkedinMix
2022-05-13
Previous Post: Poll: 89% of Okinawa residents believe there are “gaps” with the rest of Japan
Next Post: AJC delegation visits Japan to strengthen close ties with American Jewry