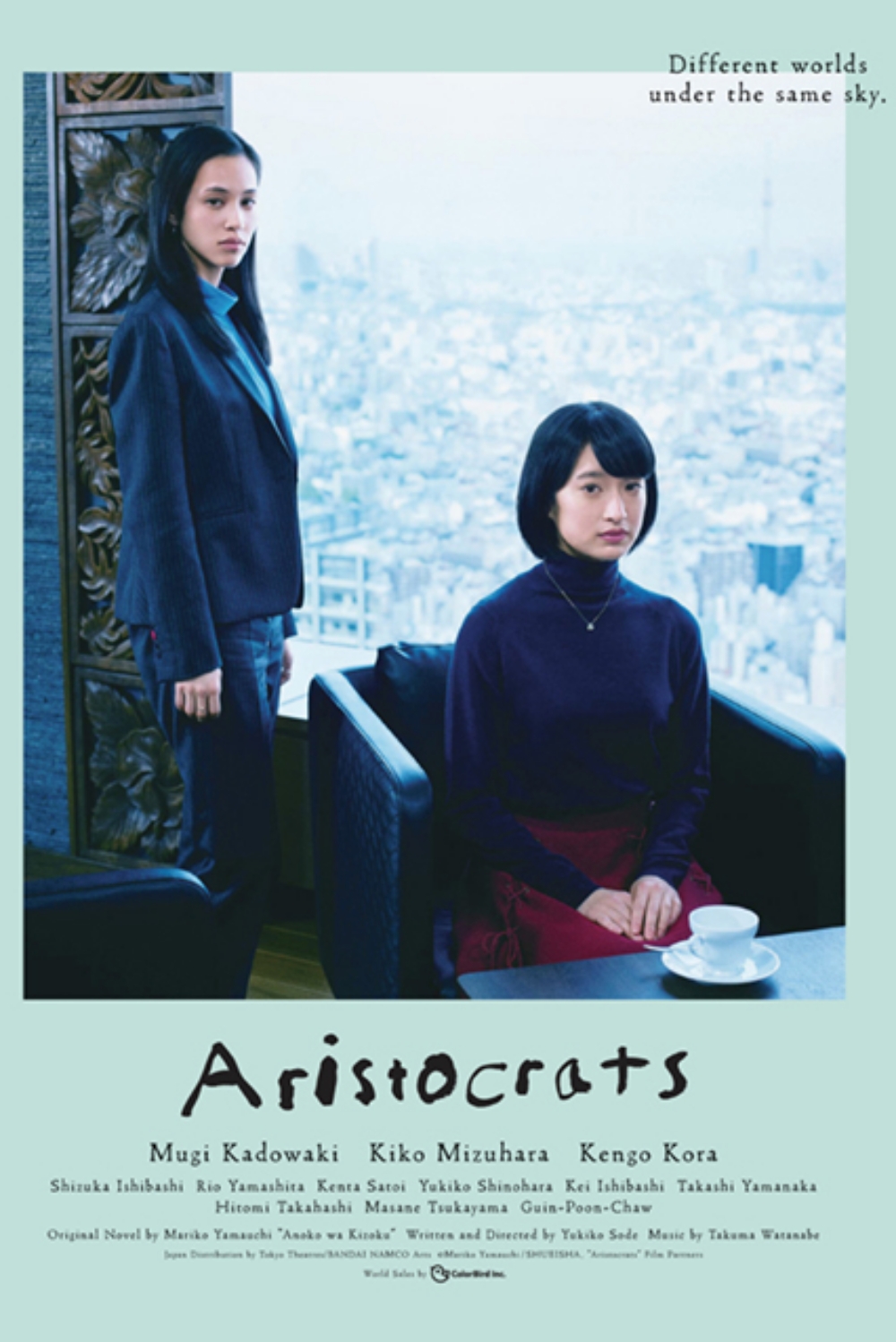 Aristocrats – A film about two women of different social classes, struggling with their respective journeys in life.

WHEN a movie buff raves about a particular movie they just watched, it’s nothing out of the ordinary. However, when someone who doesn’t have much interest in movies suddenly becomes lyrical for days on social media, that’s something remarkable.

This happened with a friend of mine based in Tokyo, Kiku.

At the start of last year, she kept talking about “Aristocrats” – a film that was showing in Japan at the time. His enthusiasm was contagious, even I became curious.

Not knowing if I would ever be able to watch it, I bought the novel it was based on, “Ano Ko ha Kizoku” (That Child is an Aristocrat) written by popular author Yamauchi Mariko. It was an easy read, but stimulating at the same time.

A year later, I was thrilled when the Japan Foundation announced the lineup for the 2022 Japanese Film Festival (JFF) Online, which was free in 25 countries. Amid the Covid-19 pandemic and global travel bans, watching foreign films was a safe way to “travel” without leaving the country.

There were 20 films in the list, including two animated films. While the 2020 and 2021 releases were the main highlights, some older films were also available.

‘Aristocrats’ was in this list, among those that I wanted to watch.

Every nuance and representation

Set in Tokyo, “Aristocrats” is about Hanako and Miki, two women of different social classes struggling with their respective journeys in life. Their paths crossed because of a man they both see.

I suddenly understood why the film appealed to Kiku. Hailing from a remote mountain town in Nagano Prefecture called Iida, she is said to be familiar with the “inside versus outside” scenario, having worked and lived in Tokyo for the past decade.

Director Yukiko Sode captures the nuances of the novel beautifully, and the hustle and bustle of Tokyo becomes quiet and visually pleasing as we follow the urban-rural divide that we as visitors or tourists don’t often see beyond the glamorous. glitzy of the Japanese metropolis. . Sumodo is a sports documentary that dives behind the scenes to capture the lives of two sumo wrestlers from different stables.

Still a cultural journey through Tokyo was ‘Sumodo: Successors of the Samurai’, released in 2020. From filmmaker Sakata Eiji, this sports documentary dives behind the scenes to capture the lives of two sumo wrestlers from different stables as they they are preparing for the big Japanese tournaments.

More than the sport itself, it shows the construction of the character of these two athletes, Ryuden of the Takadagawa stable and Goeido of the Sakaigawa stable, and what they go through to survive in the highly competitive and complicated world of professional sumo.

To many foreigners, sumo may seem like a comedic sport with comic-looking athletes.

To some, it may seem like a discriminatory arena where women aren’t allowed in the ring.

However, it’s an interesting insight into Japanese culture where mental toughness is the key to victory.

Watching the two men face off towards the end, I was compelled to root for both of them.

From Tokyo, I was able to “travel” to the northern prefecture of Aomori, famous for its apples.

The 2021 movie ‘Ito’ was really a mix of Japanese traditional and pop cultures.

The story is about a high school student Ito, who lives in the outskirts of Hirosaki City. Like many people in rural areas, she speaks the local dialect with a heavy accent and struggles with standard Japanese. She also has trouble socializing with others, often stuttering in the Aomori dialect. 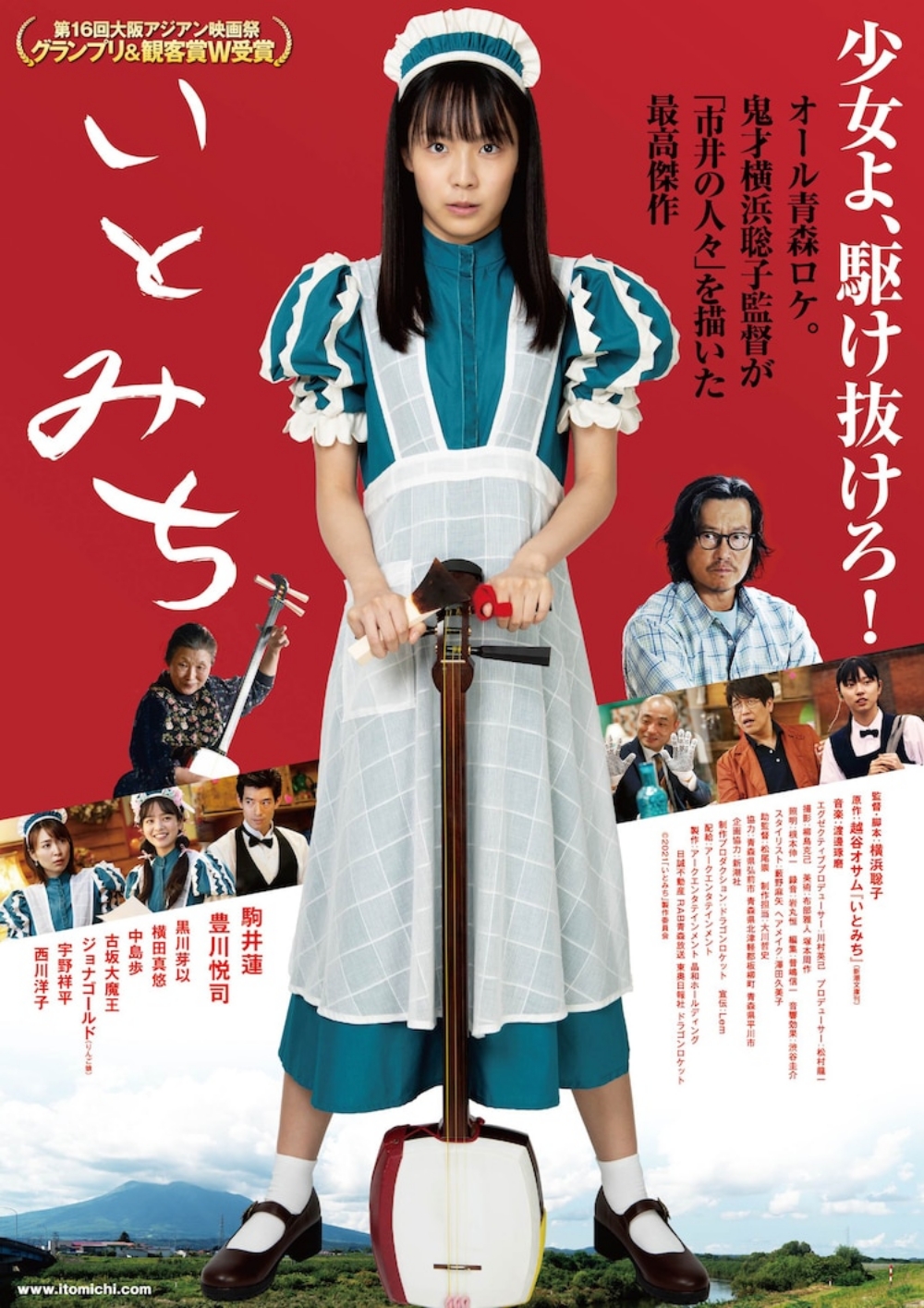 Ito portrays the phases the titular character goes through as she blossoms in personality and talent.

As a language learner, I’m interested in non-standard Japanese dialects, so I find the film fascinating in that sense. I read somewhere that director Yokohama Satoko, who is from Aomori herself, struggled to find a young star who could speak the dialect, in order to be believable enough to play Ito. Eventually, 21-year-old Komai Ren, another Aomori native, was cast in the lead role.

Another cultural aspect of this Aomori “trip” was the “Tsugaru shamisen,” a traditional three-stringed plucked instrument that has its roots in Tsugaru, at the northern end of the prefecture. In the film, Ito is an aspiring and talented Tsugaru shamisen player, and the third generation instrumentalist in her family.

However, she thinks she looks silly when she performs.

Before the pandemic, tourists seeking pop culture experiences in urban Japan often gravitated to maid cafes. In a maid café, waiters are dressed as western-style maids and treat customers like their masters or mistresses at home. It takes some guts and guts to dress up and be cute and submissive to strangers.

In her search for a part-time job, Ito is lured by an unlikely ad – a vacancy at a maid’s cafe in nearby Aomori. As traditional and pop cultures converge, Ito blossoms in personality and talent. 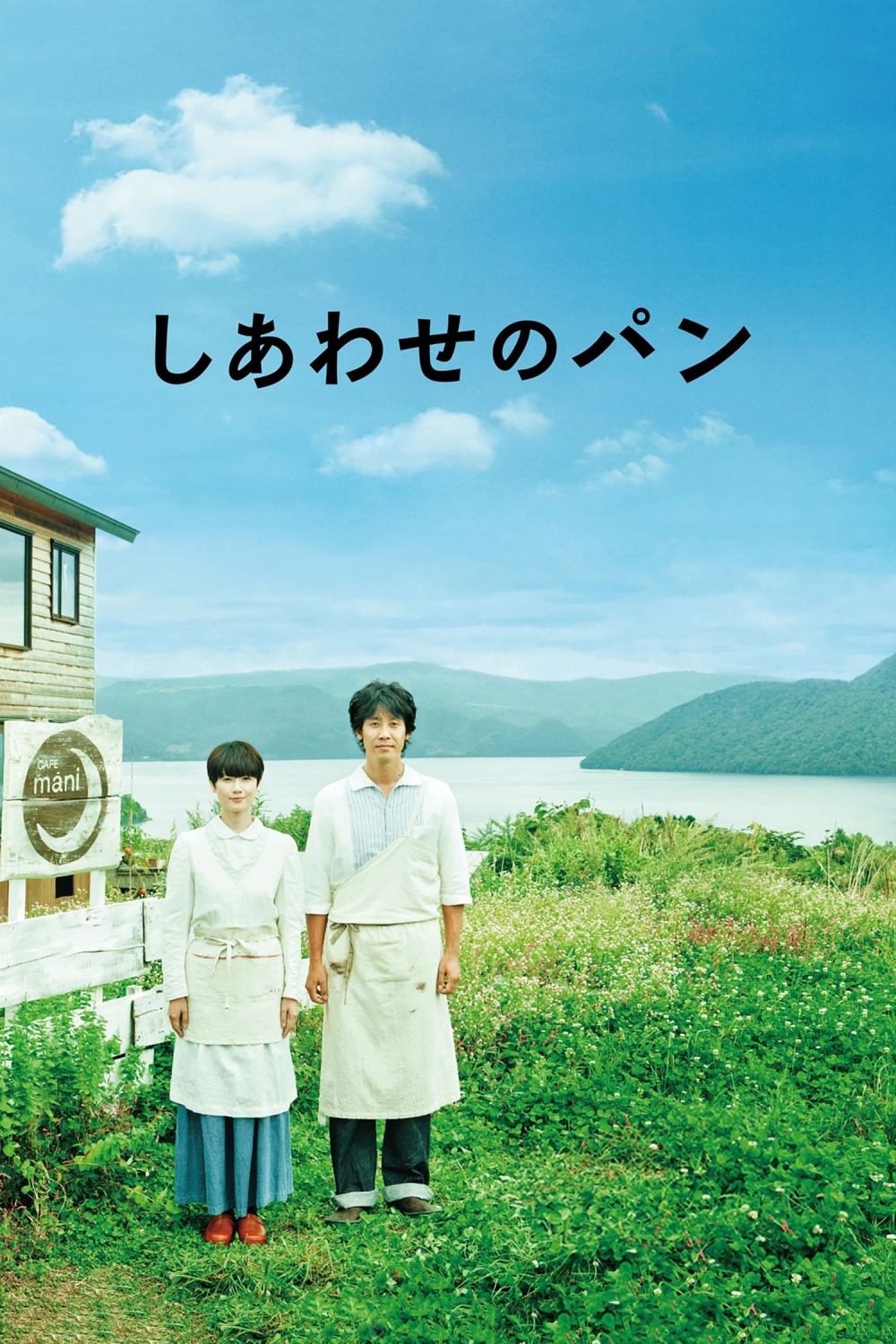 The cafe depicted in ‘Bread of Happiness’ closely mirrors those located in rural areas of Japan.

A 10 year old movie in the JFF lineup took me further north to Hokkaido.

“Bread of Happiness” was shot and filmed around scenic Lake Toya.

Formed from a volcanic caldera, the lake is located in Shikotsu-Toya National Park, popular with nature and hot springs lovers.

In the film, Rie and Nao are a couple who moved from Tokyo to Hokkaido. They run Café Mani, a lakeside café-bakery that also offers accommodation. Although out of the way, the cafe has its regular and non-regular customers. Each of them comes with their own personal issues, but they leave a little brighter and with a full stomach.

Interestingly, the cafe does exist in real life but it’s known as Cafe Gauche and it doesn’t offer accommodation.

I love cafes located in rural areas. When traveling through Japan, I often look for these places and would try to drop by for lunch or tea. Hospitality is always impeccable as the owner treats customers like their private guests, and these cafes are usually good places to learn about local culture, history, or even community gossip. 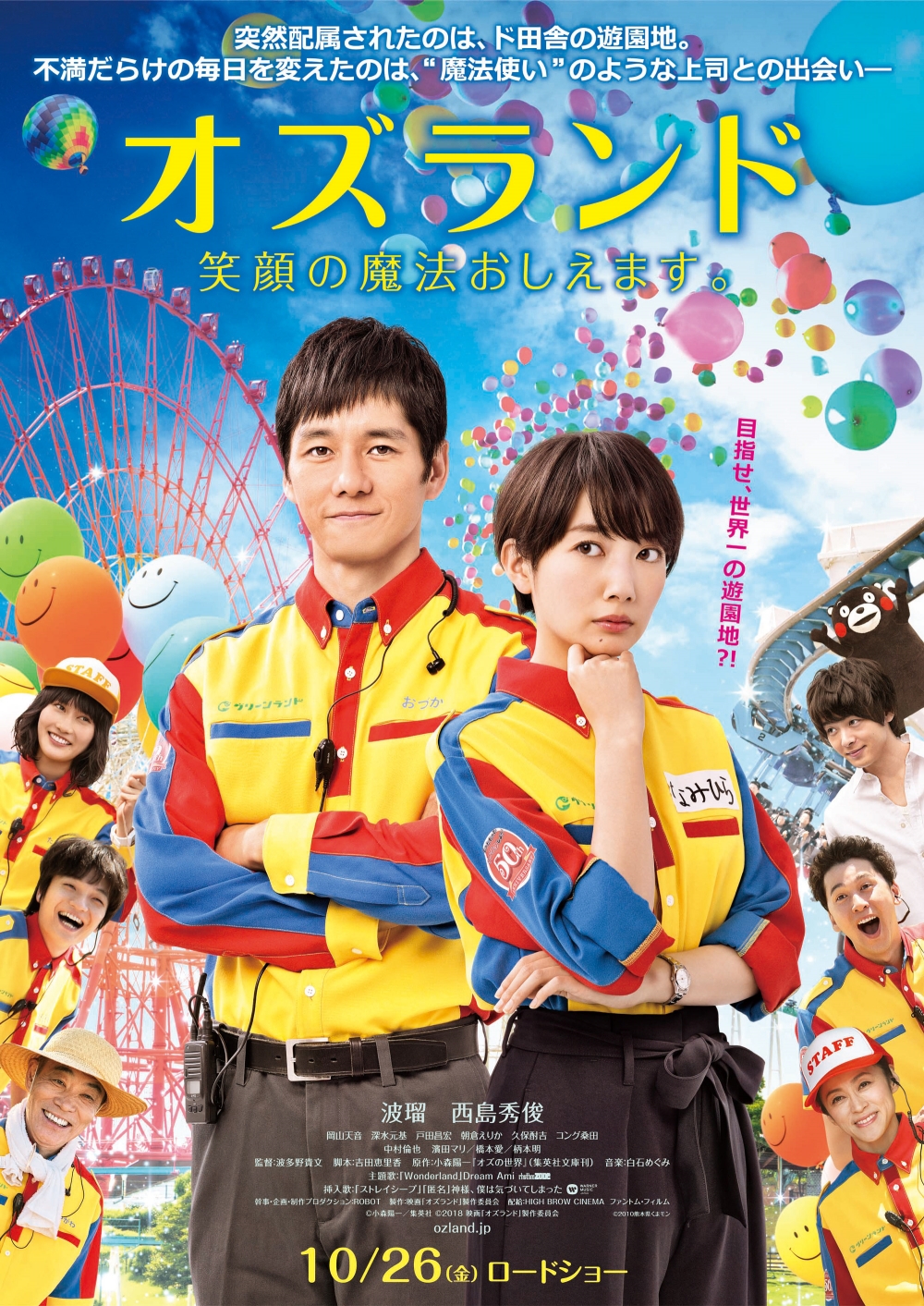 Oz Land is also based on a novel by Komori Yoichi, titled “Ozu no Sekai” (The World of Oz).

From the north, I ‘travelled’ to the southern prefecture of Kumamoto in the Kyushu region. The 2018 comedy “Oz Land” featured Mitsui Greenland, an actual amusement park that is part of a chain of resorts.

The film is also based on a novel, “Ozu no Sekai” (The World of Oz) by Komori Yoichi.

In the story, an arrogant Tokyoite Kurumi gets a job at a luxury hotel chain but is assigned to its Kyushu-affiliated amusement park. Appalled, she finds herself performing what she sees as menial duties and spends miserable days wishing she could return to the capital.

Over time, Kurumi gains a new perspective on her work and her colleagues. She realizes that her tasks have a meaning after all, which is to turn their amusement park into a dreamland where families find magic and happiness.

“Oz Land” has the “feel good” factor that anyone who has ever visited theme parks in Japan or elsewhere can relate to. The scenes of colorful attractions and happy visitors exude warmth and lightness, much like what I would feel when riding a “ferris wheel”.

JFF Online is an annual initiative of the Japan Foundation to promote Japanese cinema around the world. This year, the festival took place from February 14 to 28.