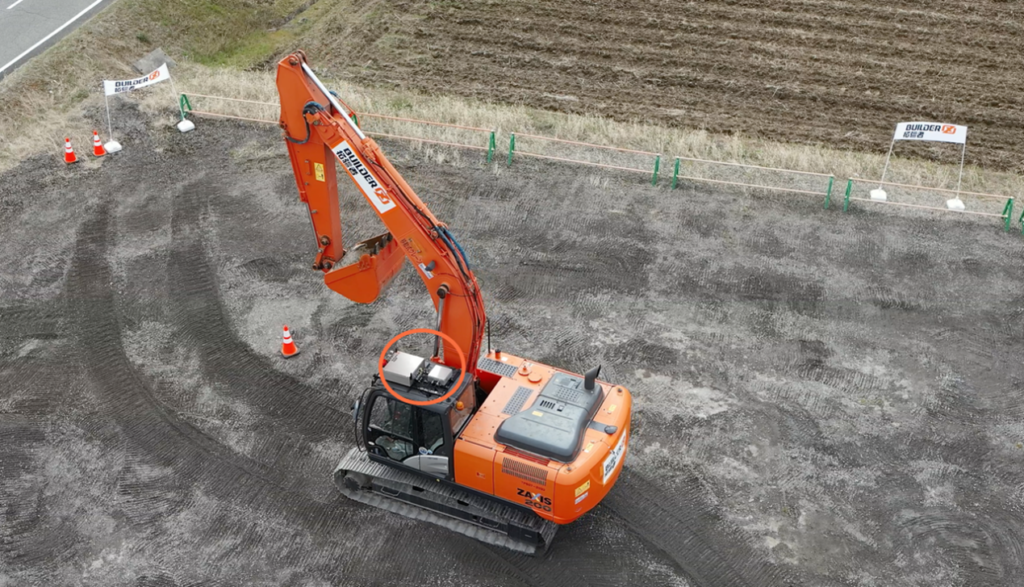 Chinese remote-controlled excavator specialist BuilderX recently shipped an installation kit from Beijing to Osaka, Japan, where it says the customer experienced seamless remote installation without BuilderX personnel on site; with remote control technology allowing an operator to operate a Japan-based excavator from China. The project is also important for the mining sector because it shows what can be achieved.

The test took place on March 23, 2022 at a local proving ground in Ono, Hyōgo Prefecture, where the excavator moved quickly and nimbly despite the absence of an operator in the cab. Despite this, the excavator successively performed a series of movements including rocking, digging and loading with precision. All these movement commands were given by the remote control center in Beijing, China, which is 1,700 km from the excavator in Japan.

Japan has an aging population with a shrinking industrial workforce – issues also facing mining operations around the world. The aggravation of the problem of shortage of labor has led to a substantial increase in the cost of carrying out construction works. The labor shortage is also causing some construction projects to be postponed as multiple projects use the same group of construction workers and therefore new projects cannot start until the group has finished the previous project. Additionally, for the past two years, Japan has had to suspend plans to bring in workers from overseas due to international travel limitations during COVID-19.

Along with an aging society and labor shortages, the prevailing relief of mountains and hills in Japan prohibited the use of larger-scale excavators. Earthquakes and tsunamis also occur frequently, and post-earthquake construction requires a large number of industrial machinery. Moreover, after the economic boom of the 1980s, much of the infrastructure in Japan has reached the end of its lifespan and is waiting to be renewed.

To meet all these challenges, the Japanese government has tried various technologies such as industrial automation and digitalization. The government hoped to use new technologies to be able to respond quickly to emergencies and natural disasters. These technologies have also been adopted by the government to help solve the problem of labor shortage, thereby increasing construction efficiency. However, due to many technical limitations, the robotization engine in Japan is not yet fully developed and used in construction or rescue and rescue operations. As a leading provider of remote control technology. BuilderX says its smart remote control system has become a top choice for Japanese customers. “The BuilderX system’s low latency, ultra-long distance support, and excellent stability and reliability have won the preference and trust of many Japanese customers.”

During the on-site test, BuilderX adapted a remote network transmission solution to ensure real-time 4G network throughput over the 1,700 km distance between Ono and Beijing. BuilderX believed that focusing on reducing sensor cam CODEC lag was key to minimizing remote control system latency and optimizing user experience. BuilderX claims to have been able to upgrade the algorithms and parameters to the optimal level. The system was able to read and process data, complete video encoding and decoding, and display it on both sides, in 60 milliseconds. The 1,700 km remote control test was successfully completed using the public 4G network, and the closed-loop lag was as low as 170 milliseconds.

After the successful on-site test, the Japanese customer praised BuilderX: “It was not easy to connect our team in Japan with the BuilderX team in Beijing and we worked together to make everything go smoothly . When we saw the excavator moving with Beijing commands and control, we were very excited. Japan faces many challenges when it comes to labor shortages. I believe the remote control system for construction work will become very popular and gain huge success in Japan. »

The operator was asked how it felt to remotely control an excavator? “Even though the distance was long, I was able to make a few small movements with precision. The process was very seamless. There was no noticeable lag between what Beijing could see and what I saw. There was no frost at all. I felt like I was driving the shovel.

In the past, there were a few instances where people used a private 5G network to remotely control an excavator. BuilderX, however, says it was able to achieve this by using a public 4G network, and it makes a huge difference. “Traditional 5G remote control was highly dependent on the network itself, and the cost would be very high. BuilderX was able to achieve this by inserting a mobile 4G SIM card into both the machine in China and the machine in Japan. By Compared with private 5G network, BuilderX’s public 4G network could be applied to a much wider range of environments with high flexibility and adaptability.What’s more, using public 4G network is much cheaper than 5G network private.

The ability to perform remote control operation using a 4G network has also allowed BuilderX to explore a variety of different use cases, especially large-scale clusters or cases involving remote control. remotely from abroad. These strengths will further diversify the use cases of the driverless system. “In today’s digitalization boom, BuilderX is constantly striving for technical improvements based on customer needs. BuilderX is also dedicated to increasing productivity and profitability, as well as creating a safe construction work environment BuilderX is ready to embrace all kinds of industry trends and changes in the future.

Currently, BuilderX’s remote control solution for excavators has been used in cases such as smart metal mining and coal mining as well as bulk ports. Going forward, BuilderX says it will continue to upgrade its technology, design and build more digital solutions tailored for more use cases, and add values ​​to the technological revolution in the industry.

FacebookTwitterLinkedinMix
2022-04-20
Previous Post: Japan posts trade deficit in March due to weak yen and oil prices
Next Post: Xbox Japan is working with ‘top-notch developers’ on a ‘revolutionary’ product