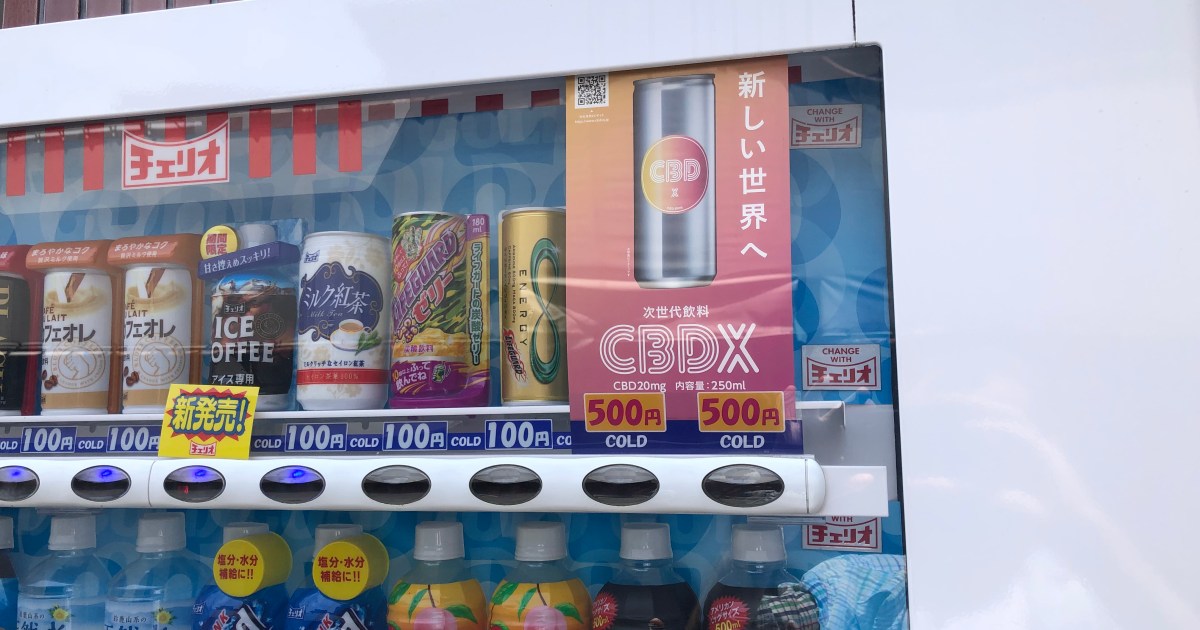 But is it worth it?

Although laws regarding the consumption and sale of cannabis have been gradually relaxed in some parts of the world, Japan has pretty much maintained its hardline stance against it. However, about a year ago the government made some allowances for cannabis-derived pharmaceuticals, and now we are starting to see some fruits of that development.

A particularly fruitful development is the release of CBDX, a drink that contains 20 milligrams of CBD oil in 250-milliliter (eight-ounce) cans for 500 yen (US$3.69) each. It recently appeared in vending machines operated by Cheerio, a soft drink maker known for unusual creations like soda that looks like mayonnaise and chocolate-mint soft drinks.

The release went viral online with comments such as the following:

“We’re in a time where you can buy this stuff from vending machines.”
“I tried it! It had a fruity flavor reminiscent of a tropical island.
“A small amount of CBD does not work…”
“A Strong Zero is more profitable, I think.”
“Whenever I look at these types of health drinks, I think if they were really effective, they would be turned into real medicine rather than just health drinks.”
“You would have to be a millionaire to buy 500 yen drinks from a vending machine in this economy.”
“Is it okay to drink this at work?” »

That last comment poses an interesting question, so let’s find out while drinking at work! Sure, CBDX is made with CBD oil which does not contain THC according to Japanese lawbut the substance alone is said to have health benefits, such as pain and anxiety relief.

One credit I will give CBDX off the bat is that it came out of the machine surprisingly freezing, which was perfect on a pretty hot day like today.

After taking it back to the office, I opened it and tasted. It was fruity but not particularly sweet, a bit like a delicious golden apple. It was also good on a particularly hot day in terms of cooling down and not leaving your mouth sticky afterwards.

I guess it tasted like an energy drink, although “energy drink” is probably the wrong word because it’s only about 62 calories and few boosting ingredients.

▼ No protein, no fat, no salt, but 6.3 grams of carbohydrates per 100 milliliters

After drinking, I didn’t feel anything really different. On the contrary, I felt a little less tired, and at the same time a little more relaxed than before. If it was the effect of the drink and not just my imagination, I guess it’s slightly better than a cup of coffee. The caffeine tends to give more of a rush then a crash, but I feel like I have a smoother, more stable focus.

By the way, there’s a very similar drink that came out recently in Japan called Chill Out. However, Chill Out uses an uncertain amount of hemp seed oil instead of CBD oil, and seems to rely more on other ingredients, such as GABA, for its relaxing effect. CBDX, on the other hand, is pretty much just the pure oil and a few flavors.

All in all was fine, but the 500 yen price tag is just too high a price to keep me coming back for more. The 500 milliliter Godzilla energy drink sold just below for just 200 yen seemed to get a lot more bang for the buck…maybe too much, in fact.

Still, if you’re in Japan and want a delicious dose of CBD oil for whatever ails you, just find a Cheerio vending machine near you or order some directly from CBDX website.

Source: CBDX, Hachima Kiko
Images: ©SoraNews24
● Want to be up to date with the latest articles from SoraNews24 as soon as they are published? Follow us on Facebook and Twitter!