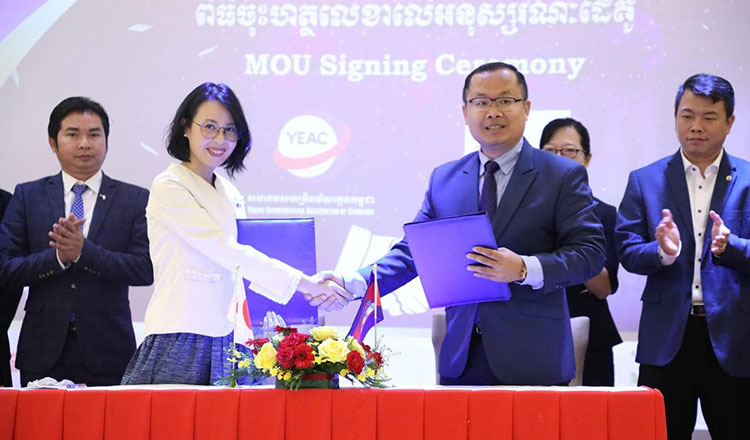 Agreement to strengthen trade relations between Japan and Cambodia

The Japan External Trade Organization in Phnom Penh (JETRO) recently signed an agreement with the Young Entrepreneurs Association of Cambodia (YEAC) to strengthen cooperation, support the private sector in trade and promote business relations between the two countries, according to the official JETRO Facebook page.

Marisa Haruta, Chief Representative of JETRO in Cambodia and YEAC Chairman Seang Sopagna signed the Memorandum of Understanding (MoU) at a CEO Gathering event attended by around 200 business people and government officials.

The agreement would allow the two organizations to work together to facilitate the creation of a good business environment and encourage Japanese private companies to invest more in Cambodia. The two sides would also organize trade and investment events such as business matchmaking, workshops, trade exhibitions and trade missions.

Earlier this year, JETRO had signed a Memorandum of Understanding with the Cambodian Chamber of Commerce (CCC) to strengthen and deepen cooperation between the two and between the Asean Business Advisory Council and JETRO.

Bilateral trade between Cambodia and Japan increased by 2.1% to reach 181 million dollars in January this year, compared to the same month of the previous year.

The Kingdom imported $39 million worth of goods from Japan, a year-on-year increase of 3.5%. JETRO listed apparel and electrical and electronic components as Cambodia’s top exports to Japan and machinery, electronics and high-tech products as top imports.

Commerce Minister Pan Sorasak recently said that Japan has made a significant contribution to Cambodia’s economic development by strengthening the country’s infrastructure, human resource development programs and economic relations between the two.